Before Abula got to this lofty height, it went through divers’ forms of scrutiny at seminars, competitions, presentations and others.

The First National Coaching Clinic on Abula Game was conducted by the Abula Association of Nigeria which later transformed to Abula Federation of Nigeria under the leadership of late Alhaji A.B. Fashola and Mr. G. A. T. Oboh in 1996 as a non-governmental sport organization.

The final ratification for Abula was at a Technical Seminar held during the Joint Consultative Committee on Education (2001) which recommended the game amongst others to the National Council on Education, this gave final approval for the game to be included in the National Curriculum under Prof. Babalola Aborishade, the then Minister of Education. A handbook of Rules and Regulations, guiding playing and teaching of selected Nigerian Traditional Sports, was issued.

In the forward to this Handbook, written by Dr. U. B. Ahmed, he stated as follows:

I am highly delighted to write the forward to this epoch making text on traditional sports in Nigeria.

The choice of Abula, Ayo, Langa and Kokawa amongst the traditional sports in Nigeria is based on many years of experience and involvement of the Resource Persons in teaching and active participation in the sport. I wish to acknowledge the contributions of the Resource Persons, prominent among them is Professor Chado, A. B. U. Zaria, Mr. Elias Foluso Yusuf (originator of Abula and former National Chairman of Traditional Sports), Mrs. Rose Adiole and Alhaji Bako Abdul who worked with the Sport, Physical and Health Education Branch of this Ministry (FME) to modify and standardize the rules and regulations to guide the teaching and playing of the sports. 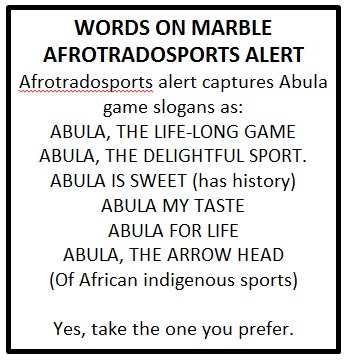 This publication will be useful to teachers, institutions and students in the proper mastery of the four traditional sports approved by the National Curriculum on Education for introduction to Primary and Secondary Schools in Nigeria.

Dr. U. B. Ahmed was the Director, Primary and Secondary Education, Federal Ministry of Education, Abuja (2001).

Sequel to the above, Abula is now expected to be in the school syllabus in all the states of the federation. Abula is on page 384; schemes of work published in September, 2009 and page 316 September 2010 in Lagos State.

The emancipation of the Abula game is a pride to all of us in the Education sector especially in Lagos, Nigeria and Africa where this game was invented. We should remember that games like Volleyball, Basketball… etc. were invented by individuals and developed in the environment of invention and they have eventually become Global Sports.

So, if Abula is established in every Primary and Secondary School in Lagos State and Nigeria, it will automatically become a Global Sport within a very short time without much hassle. As they say charity begins at home.

In a new effort to propagate the Abula game, a Programme named: SAY YES TO ABULA was proposed at the 27th anniversary of Abula game (February 8 – 1984-2011) to encourage schools in providing the infrastructure of the Abula Game to students of the schools as both study and playing materials.  SAY YES TO ABULA in your school as the National Curriculum of Nigeria has said YES to ABULA.

Lagos State (Nigeria) started a championship on Traditional Sports among the Secondary Schools in the state in 2016 and held the second edition in 2018. The sports involved were ABULA, AYO, KOKAWA (Traditional wrestling) and LANGA. There is need to put the infrastructure and equipment of playing the sports in the schools. Other states of the Nigeria Federation should follow this giant stride which is in the right direction in promoting our traditional sports in our schools. Bravo, Lagos State.

As the championship was started by late Mr. Deji Tinubu, let the championship be named after him as: DEJI TINUBU MEMORIAL CHAMPIONSHIP FOR LAGOS STATE SECONDARY SCHOOLS ON TRADITIONAL SPORTS.